Practise the specific areas of language that feature in the Multiple Choice Cloze task in the FCE Use of English paper.

Part 1 of the FCE Reading and Use of English Paper is called 'Multiple Choice Cloze'. Watch our short, 5 minute video explaining this task. Please note that reference to the 'new' exam format relates to the update that took place in 2015.

Here's an example Multiple Choice Cloze exercise. As you can see, the task consists of a short text with 8 gaps or 9 gaps if we include the example at the beginning. Each gap equals one word and the candidate has to complete each gap by selecting the correct word from a choice of 4; A, B, C or D. Here we have the choices listed, 1 to 8. If we look at the example, we can see a gap marked (0) and above the text we can see the correct choice for (0) is marked as 'C' or 'branch', as in 'branch of history'.

Let's turn to the language skills you'll need to work on during your preparation. The main focus in the Multiple Choice Cloze task is vocabulary. Various aspects of vocabulary are likely to be tested but there are some key areas you should try to focus on during your preparation. In general, you should try to focus on learning 'chunks' of vocabulary, that means set expressions rather than simply individual words.

Idiomatic expressions
Other common idiomatic phrases might appear in the text with one of the words gapped, such as 'under the weather' with either 'under' or 'weather' gapped.
Practice

Collocations
Collocations, or words that go together regularly appear in the Multiple Choice Cloze. Phrases like 'to reach a decision' are fixed. We don't say 'to achieve' or 'attain a decision'. Although we do say 'arrive at a decision', that's another collocation, there's no 'at' after the gap so the correct answer is 'reach'.
Practice

Synonyms
In addition to chunks you need to be aware of common synonyms and how words work in one context but not another. For example, 'fee', 'price', 'cost' and 'charge' have a similar meaning but only one fits here correctly.
Practice

Linking word
Occasionally a linking word or what is sometimes called a discourse marker will be the gapped word such as in this example.
Practice

You should always read the complete text before attemting to answer any questions. Having a big picture or global understanding of the text will help you make decisions later.

A key tactic in this exercise is to look for clues around each gap. We've already noted the importance of learning set expressions and the word before or sometimes after the gap will often be part of a set phrase and will help you decide which of the choice of four words is the correct one. If you find it difficult to make a choice eliminate those you know are wrong and if necessary make a guess as to the correct answer. You never know, you might be lucky.

That's the end of this video. If you’d like further practice in the new FCE exam visit the Flo-Joe website at www.flo-joe.co.uk.

Ready to try some practice tests? Try these: 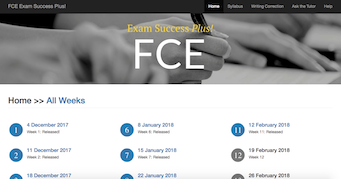 Need further practice in grammar and vocabuary exercises with a focus on the Multiple Choice Cloze?

"I really like to improve myself using the flo-joe services, because here, you have your own teacher just before you (your PC screen), and it helps a lot! thanks! for existing!"
Silvonetto Oliveira, FCE student Brazil