Practise the specific areas of language that feature in the Open Cloze task in the CAE Use of English paper.

Part 2 of the CAE Reading and Use of English Paper is called 'Open Cloze'. Watch our short, 4 minute video explaining this task.

Part 2 of the Reading and Use of English Paper is the Open Cloze task.

The Open Cloze task consists of a short text with 8 gaps - 9 gaps including the example at the beginning. Each gap equals one word and the candidate has to complete each gap by identifying the missing word.

The main focus in the Open Cloze is grammar. Let’s look at some common parts of speech that are often gapped.

Pronouns
Pronouns will often be gapped. In particular look out for pronouns in set expressions, reflexive pronouns, for example, ‘myself’ or ‘yourself’ and relative pronouns - who, where when etc. Try the following quiz:

Conjunctions
Conjunctions like ‘although’, ‘yet’, ‘still’ or ‘because’ will sometimes be gapped. Try the following quiz:

Prepositions
Prepositions, especially those in set expressions like ‘on the contrary’ or ‘in the meantime’ will sometimes be gapped. Try the following quiz:

Exam tips
Make sure you read the complete text first before attempting to answer any questions. Having an overview of the content will sometimes help you to identify missing words.

Pay attention to the clauses and words around each gap as these will usually help you identify which part of speech is missing - a verb, a conjunction, a pronoun for example.

That’s the end of this video. If you’d like further practice in the new CAE exam visit the Flo-Joe website at www.flo-joe.co.uk. 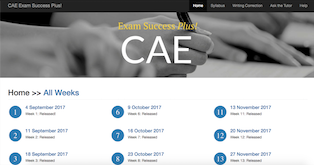 Need further practice in grammar exercises with a focus on the Open Cloze?

"I passed FCE, now I'm preparing to CAE. Thanks to all Flo-Joe's crew for creating this wonderful site."
Anna, CAE Student, Poland