Tests ability to: speak at length coherently, use language to describe, compare and contrast, hypothesise and comment upon a topic.

At this stage of the interview the examiner will say something on the lines of:

Q: In this part of the exam I'm going to give each of you three photographs and I'd like you to talk about them on your own for about a minute and also to answer a question briefly about your partner's photographs.

Q: Here are your pictures (Candidate A). They show people in different educational settings. I'd like you to talk about two of these photos and compare the settings and say how the students may be feeling in each one. 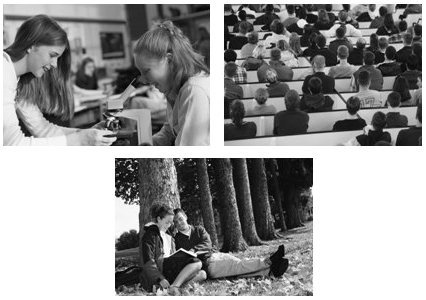 Notice there are TWO instructions here: first to 'compare and contrast' the photographs and also to speculate on how the students 'may be feeling'. In Part 2 candidates are required to show they can do more than simply describe and will need to show the ability to speculate or hypothesize on a particular topic or scene.

1. The picture set will have a general theme but try to find two that are either very similar or very different in some way. This will give you a basis on which to compare and/or contrast the two pictures. In the example above, pictures two and three show two contrasting educational settings: the formal lecture theatre in picture two compared to the relaxed outdoor scene in picture three.

2. In terms of hypothesizing, pictures two and three offer a good opportunity to speculate on how students in each contrasting situation might be feeling. Think about opportunities for hypothesizing when choosing your pictures.

3. Signpost the end of your talk by adding a personal reaction to the pictures. For example:
'The two people in picture three look like they're enjoying themselves but personally, I think I'd prefer to spend my study time in a lecture theatre where I'd be more able to concentrate on learning'.

4. Many people preparing for the CAE oral exam worry about not having enough to say in the time available or not having enough time to express their ideas. The best way to get the timing right is to practise making short talks on various topics on your own. (Or in front of a friend if you're feeling brave!)

Don't lose the opportunity to get your Part 2 long turn off to a flying start. Unit 5 of CAE Speaking Success will teach you THREE essential things to remember when starting your talk.

CAE Exam Success Plus Other Publishers